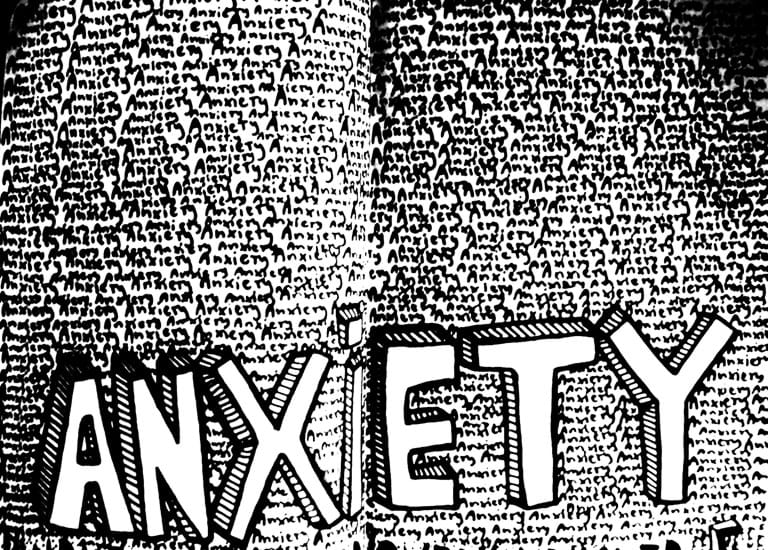 Anxiety is a general term used for several conditions that involve worry, fear, apprehension and nervousness. These conditions affect how we feel and behave, and can manifest in real physical symptoms.

Anxiety is the most common mental condition is Australia. 1 in 3 women and 1 in 5 men will experience anxiety, and as with most conditions, the severity varies from person to person. Anxiety affects not only the individual but also their relationships with family, friends, intimate partners, and work colleagues.

People often experience a general state of worry, concern or fear before facing challenging situations such as a job interview, a school test or medical examination. These feelings are considered normal. But Anxiety occurs when these feelings interfere with a person's normal functioning or ability to sleep, and when the reaction is disproportionate with the event or situation faced.

These days, while people can often recognise they have anxiety, they may not necessarily see it as a major problem. They think ‘being anxious’ is just a part of their personality. This view can be problematic as it may lead to more severe forms of anxiety such as Panic Attacks or Obsessive Compulsive Disorder (OCD). Anxiety, left untreated, can leave one immobilised and may lead to depression.

Fortunately Anxiety Treatment is available and effective. So if you feel anxious more than you would like or recognise too many of the symptoms described below, give us a call.  We can help with any type of anxiety:

GAD is a condition characterized by consistent worrying that is not specific to any one thing, but can be about anything and everything such as life events, objects or situations. GAD is a condition that develops slowly over a period of time (years). This may lead people to think that it is simply a part of their personality.

GAD sufferers frequently worry and feel fear about their finances, work, health, death or dying, family or school but have trouble controlling their worry and cannot pinpoint the specific fear. Their worry or fear is usually unrealistic or disproportionate to their situation. Their fear of failure or disaster interferes with everyday functions like work, social activities, school and relationships.

Symptoms of Generalized Anxiety Disorder include:

The causes of and risk factors for Generalized Anxiety Disorder may include:

Panic Attacks are sudden feelings of uneasiness, terror or fear that strike without warning. Sufferers may feels like they are having a heart attack, are going crazy, or are going to die. An episode can occur abruptly and is at its most severe for around 5-10 minutes, then reducing to waves for usually no longer than an hour.

The fear and or terror that the sufferer experiences during a panic attack is disproportionate to the event or situation and may be totally unrelated to the environment at the time. Panic Attacks usually occur during prolonged periods of stress or after frightening experiences but can be spontaneous as well. Episodes can occur at any time, even during sleep.

Most people with Panic Attacks experience several of the following symptoms:

The causes of Panic Attacks are unknown but factors that may contribute include:

Research suggests that the body's natural fight-or-flight response to danger is activated during panic attacks. For example, if a bus was going to crash into you, your body would react instinctively. Your breathing and heart rate would speed up as your body prepared itself for a life-threatening situation. The same reactions occur in a panic attack. However, it's not known why it occurs when there is no clear and present danger.
If left untreated, Panic Attacks can evolve into a more chronic condition called Panic Disorder

Sometimes, having experienced frequent episodes of panic, a sufferer will begin to live in constant fear that another attack is just around the corner. The constant worry about future panic attacks, in itself, triggers further episodes, and so the condition becomes chronic.
Sufferers can become so actively aware of any change in their normal body function that they see it as a life threatening condition or illness. This hyper-vigilance may cause them to make drastic behavioural changes, such as avoiding particular places, situations or objects, in order to avoid these attacks.

Symptoms are similar to those of Panic Attacks but more severe. Panic Disorder is often accompanied by other serious issues such as alcoholism, drug abuse or depression. Each condition requires separate treatment.

Signs of Panic Disorder usually begin in the late teens or early adulthood and affect more women than men. Panic Disorder can affect people’s lives to the extent that they avoid normal activities, such as driving or grocery shopping. About one-third of sufferers become housebound. Some are only able to do daily tasks when accompanied by a trusted person or spouse.

Unfortunately sufferers of panic disorder may sometimes seek treatment from one doctor to another for years before someone correctly diagnoses their condition. This is quite sad as Panic Disorder is one of the most treatable of all the anxiety disorders.

Anxiety that stops one from participating in regular activities outside the home is called Agoraphobia. Sufferers avoid going out because they fear being trapped and that escape might be embarrassing or difficult. Activities avoided may include taking public transport, being in large open spaces (an oval), or closed in places, e.g., watching a movie or being in a crowd or standing in a queue. Agoraphobia usually begins before age 35, but older adults also can be prone.

Social Anxiety is an intense, excessive or irrational fear of being in social situations. This condition is not about shyness. Sufferers are acutely nervous about being closely watched and judged. Fear of being embarrassed, being criticized or humiliated in daily social interactions, having a meal in public, or being assertive at work are examples of Social Anxiety.

Social anxiety can wreak havoc a person’s life. Symptoms may be so extreme that they disrupt friendships and intimate relationships, making the person feel powerless, alone, or even ashamed.

Social anxiety usually begins in childhood or adolescence. Children may display clinging behaviour, tantrums, and even mutism. The exact cause of Social Anxiety is unknown. However, we do know children exposed to negative experiences such as bullying, family conflict or sexual abuse can develop social anxiety. And Social Anxiety, like other anxiety disorders can run in families as children learn to react to situations in the same way as parents.

Physical symptoms of Social Anxiety or Social Phobias may include:

Psychological symptoms may include:

It is normal for us to sometimes feel anxious in social situations, but  Social Anxiety is a constant fear of being watched and judged by others or being embarrassed or humiliated in front of them.

Signs of social anxiety can occur in all social settings if the condition is broad or severe. However, it may appear only in some situations if sufferers have limited or selective anxiety. For example, symptoms may only appear when talking to strangers or eating in front of people.

A common phobia, of course, is fear of spiders or arachnophobia. In reality, very few spiders bite and even fewer are life threatening, and yet many people experience a feeling of severe dread when seeing them or even just thinking of them. Other examples of common phobias include fear of thunderstorms, snakes, flying, crossing bridges, and seeing blood.

Some people can go their entire life with a phobia and not require nor seek treatment. For example, a fear flying can be overcome by choosing not to fly. While this approach avoids disruption it does, no doubt, limit ones opportunities and experiences.

Although we are all exposed to risks that could place our lives in danger, we enjoy safety most of the time. Unfortunately, it is still possible to experience a life trauma – either physically or emotionally that can be very disruptive to our well-being. The after effects of such a trauma can result an anxiety problem we have all heard about, Post Traumatic Stress Disorder.

We most commonly read about PTSD in relation to soldiers returning from war zones.  However it can also be caused by purely emotional events. Read more about PTSD.

Obsessive Compulsive Disorder can be a very destructive anxiety condition. It affects more than 500,000 Australians and is the fourth most common mental health condition, after phobias, substance abuse and major depression. OCD usually begins in late childhood or early adolescence.

OCD sufferers experience intense fears of something terrible happening to themselves or others. They have frequent, intrusive, and unwanted thoughts, images and impulses that greatly impact their lives. They constantly doubt their behaviour, and frequently seek reassurance. For example, a person with OCD may need to check that the stove is turned off 20 times before leaving the house.

People suffering from OCD are usually aware of their irrational thoughts and behaviours, but have no control over them. This tends to cause shame, forcing them to keep their condition a secret. People with OCD often display behaviours and fears that are not only confusing to others but also themselves. Significant relationships may be impacted as intimate partners or family members may become involved in the sufferers’ rituals, without the necessary skills to help the sufferer.

The signs of Obsessive Compulsive Disorder  are the obsessions and compulsions. Obsessions are irrational fears and thoughts that intrude on daily thoughts. Compulsions are the repetitive behaviours or rituals which occur as a response to the obsessions in an attempt to reduce anxiety.

Obsessions, or thoughts that sufferers experience, include:

Compulsions, or behaviours, that sufferers exhibit include:

Those suffering from OCD require treatment to can help bring symptoms under control so they don't rule daily life. The two main treatments for OCD are psychotherapy and medications. Research and evidence has found the most effective outcome for sufferers is a combination of these.

Most anxiety disorders are treatable. No matter what anxiety disorder you or a loved one may be suffering from, it is vitally important to obtain an assessment by a qualified psychologist. A thorough assessment will determine the most effective form of treatment. Contact us for the help you need.